Throughout the pandemic, mass injections have been dangled as the way back to normalcy — the only solution to end the pandemic and save lives from COVID-19. Now even with mass injections and some receiving two and even three shots in their arm, excess deaths are rising nonetheless.

In the week ending November 12, 2021, the U.K. reported 2,047 more deaths than occurred during the same period between 2015 and 2019. However, COVID-19 cannot be entirely to blame, as it was listed on the death certificates for only 1,197 people.1 Further, since July, non-COVID deaths in the U.K. have been higher than the weekly average in the five years prior to the pandemic.

Heart disease and strokes appear to be behind many of the excess deaths, with the Financial Times reporting, “The new phase of excess deaths raises the possibility that since the summer more people have been losing their lives as a result of strains on the NHS or lack of early diagnosis of serious illness …”2 A similar scenario is playing out in the U.S.

On Twitter, Silicon Valley software engineer Ben M. (@USMortality) revealed that in the last 13 weeks alone, about 107,700 seniors died above the normal rate, despite a 98.7% vaccination rate.3 In another example, he used data from the U.S. Centers for Disease Control and Prevention, census.gov and his own calculations to show excess deaths rising in Vermont even as the majority of adults have been injected.

“Vermont had 71% of their entire population vaccinated by June 1, 2021,” he tweeted. “That’s 83% of their adult population, yet they are seeing the most excess deaths now since the pandemic!”4

Deaths Among Teenagers Increase After Jabs

An investigation by The Exposé, using official data from NHS and the U.K.’s Office for National Statistics (ONS), found that deaths among teenagers increased 47% since they started getting COVID-19 shots.5 Not only that, but deaths from COVID-19 also went up among 15- to 19-year-olds after the shots were rolled out for this age group.

“We decided to take a look at official Office for National Statistics (ONS) data on deaths registered weekly to see if there was an uptick in deaths in people aged between 15 and 19 following the rollout of the Covid-19 vaccine to this age group,” the report notes.6

“This shows that the number of deaths between June 19th 2021 and September 17th 2021 among teens aged 15 and over were 47% higher than the number of deaths in this age group during the same period in 2020, and the increase in deaths began at precisely the same time teens started receiving the Covid-19 vaccine.

Our investigation of ONS data also revealed further concerns about Covid-19 deaths in people between the age of 15 and 19. The same 2021 ONS dataset shows that since teens started getting the Covid-19 vaccine there has been at least one Covid-19 related death recorded in seven of the thirteen weeks between June 19th and September 17th 2021. A total of 8 deaths in this time frame.

Yet in the fifteen weeks prior to teens over the age of 15 receiving the Covid-19 vaccine, just a single death was recorded associated with Covid-19 among this age group.

Correlation does not equal causation, but it is extremely concerning to see that deaths have increased by 47% among teens over the age of 15, and Covid-19 deaths have also increased among this age group since they started receiving the Covid-19 vaccine, and it is perhaps one coincidence too far.”

Significant concerns have been raised, for instance, surrounding antibody‐dependent enhancement (ADE), and the possibility that COVID-19 vaccines could worsen COVID-19 disease via ADE.8

Florida Has Been Heavily Criticized — Wrongly

Certain states have stood out for their refusal to buy into the draconian public health measures that were adopted throughout much of the U.S. Florida is chief among them. After a spring 2020 lockdown, Florida business, schools and restaurants reopened, while mask mandates were rejected.

“If Florida had simply done no worse than the rest of the country during the pandemic, that would have been enough to discredit the lockdown strategy,” John Tierney, a contributing science columnist for The New York Times, stated, noting that the state acted as the control group in a natural experiment. By summer 2021, the results spoke for themselves:9

“Florida’s mortality rate from Covid is lower than the national average among those over 65 and also among younger people, so that the state’s age-adjusted Covid mortality rate is lower than that of all but ten other states. And by the most important measure, the overall rate of ‘excess mortality’ (the number of deaths above normal), Florida has also done better than the national average.

Its rate of excess mortality is significantly lower than that of the most restrictive state, California, particularly among younger adults, many of whom died not from Covid but from causes related to the lockdowns: cancer screenings and treatments were delayed, and there were sharp increases in deaths from drug overdoses and from heart attacks not treated promptly.”

After an uptick in cases in late summer, rates plummeted by the fall. In late October 2021, Florida had one of the lowest COVID-19 daily average case rates per 100,000 residents in the U.S. “Without mandates or lockdowns, COVID-19 cases in Florida have decreased 90% since August,” said Gov. Ron DeSantis. “In addition to cases, hospitalizations have plummeted in our state.”10

Also since August, COVID-19 cases in school-aged children decreased 87% since school started back into session, while cases in young adults ages 18 to 24 decreased 93%11 Lt. Gov. Jeanette Nuñez added in a press release, “As Florida now ranks lowest in the continental U.S. in terms of COVID-19 rates per capita, we are proud to have stood firm in protecting liberty throughout the pandemic.”12

By the end of November 2021, Florida was the only state in the U.S. with low community transmission in virtually every county. While the rest of the U.S. was seeing high, substantial or moderate spread, COVID-19 was largely absent in the sunshine state.13 On Twitter, Scott Ruesterholz wrote:14

“I’ve spoken frequently about how COVID waves clearly are driven by weather (South struggles in the summer; North in the winter). This should be considered when assigning “blame” or “credit” to a governor–some trends supercede policy. Nonetheless this map is something–Florida!” 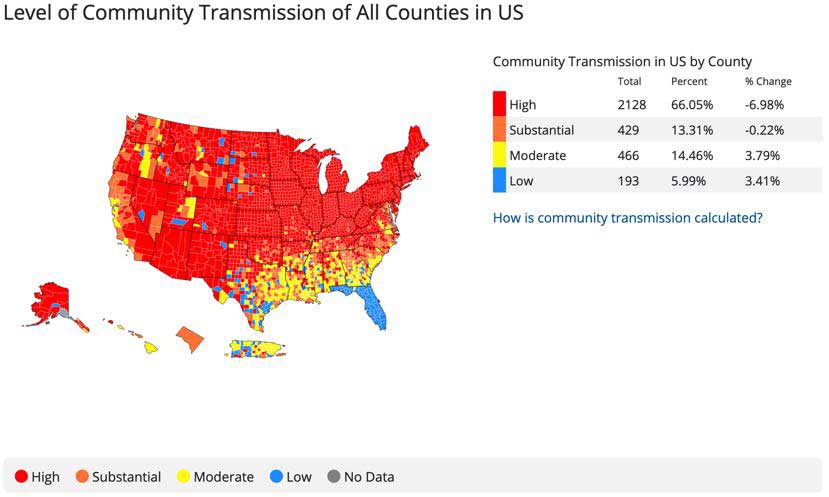 It’s concerning that heart-related events appear to be a leading factor behind the excess deaths being seen in the U.K., especially considering researchers have found Pfizer and Moderna mRNA COVID-19 shots dramatically increase biomarkers associated with thrombosis, cardiomyopathy and other vascular events following injection.16

The study, published in the November 16, 2021, issue of the journal Circulation, concluded that “the mRNA vacs dramatically increase inflammation on the endothelium and T cell infiltration of cardiac muscle and may account for the observations of increased thrombosis, cardiomyopathy, and other vascular events following vaccination.”

People who had been jabbed more than doubled their risk of acute coronary syndrome (ACS), an umbrella term that includes not only heart attacks, but also a range of other conditions involving abruptly reduced blood flow to your heart. Signs and symptoms of ACS typically begin very suddenly and include:17

Patients who received a two-dose regimen of mRNA more than doubled their five-year ACS risk, driving it from an average of 11% to 25%. In a November 21, 2021, tweet, cardiologist Dr. Aseem Malhotra wrote:18

“Extraordinary, disturbing, upsetting. We now have evidence of a plausible biological mechanism of how mRNA vaccine may be contributing to increased cardiac events. The abstract is published in the highest impact cardiology journal so we must take these findings very seriously.”

Can You Lessen the Damaging Effects?

If you now believe that getting the COVID-19 jab was a mistake and wish to lessen your doubled risk of cardiac complications, there are a few basic strategies I would advise.